This week’s Green Sheet (Issue #7) is our NFL Preview content normally in our Preseason Annual. That includes division and playoff predictions plus our win total selections for the 2020-21 season. Those picks went 5-1 last season and are 74-43-3 the past 20 years!

We will also be adding a college football page to this week’s issue by Wednesday, Sep. 2.

Nelly’s is on a red hot 9-2 run in baseball picks and we look to wrap up a second straight winning MLB month with a pick tonight for $15. We also started 1-0 in the conference semifinals with the Celtics yesterday – get tonight’s NBA Pick for $15 as we look to build on gains from a third consecutive NBA regular season hitting over 63% for our phone service.

Bobby Dalton is featuring picks in NBA, NHL, and MLB action Monday! The Big Dog is 9-5 in the NBA Playoffs and is heating up on the ice with several recent Best Bet wins.

Don’t miss this week’s issue of the Green Sheet with an in-depth look at the 2020-21 football season in the Big XII.

Can Oklahoma continue its reign in the conference or can a team like Texas or Oklahoma State rise to the top. Four head coaches will be looking to take a step forward in their second seasons while Dave Aranda joins the conference as one of the most accomplished first time head coaches in recent memory.

Get this week’s issue for only $12 or join for the entire season subscription for only $99!

That season price includes all five past issues and works out to just over $3 per issue for the season! That rate goes up to $149 soon, don’t wait any longer!

Baseball and Basketball are just around the corner – email us at nelly@nellysports.com if you’d like our MLB Preview or our NBA Restart Guide!

Green Issue #3 will be out in late May with a comprehensive look at the recently released NFL schedule.

Here is the 2020 Schedule Chart giving you every team’s path in one page!

Get more great content like this as a 2020-21 Nelly’s Green Sheet subscriber. We’ve already posted our NFC and AFC Coaching Reference Guides.

Check our a short preview of our first off-season issue of the 2020-21 Green Sheet.

The Green Sheet for the 2020-21 season and that will be an online only subscription released in the middle of each week. The subscription will start with several off-season issues in early to mid-April. We’ll have a $99.00 season subscription rate available until the first issue comes out in April.

Support us in this lean period of the calendar by signing up in advance for next season at a greatly discounted rate.

Get all the box scores from the previous weekend in one quick-reference page!

This page is part of our weekly Green Sheet football newsletter, released every Monday afternoon and covering every pro and college football game on the board.

Take a look at this week’s 1-PAGE-STATS to jump start your handicapping for the coming week.

This page is part one of the perks of our weekly Green Sheet newsletter – getting you the data from last week by Monday afternoon in one reference page to jump start your handicapping for the following week.

Get this page each week with a full season Green Sheet subscription – we’ll post this for a few more weeks but you’ll eventually need a subscription. The newsletter comes out Monday afternoon each week of the football season!

Check out all of last week’s college football box scores in one-page!

This page is part one of the perks of our weekly Green Sheet newsletter – getting you the data from last week by Monday afternoon in one reference page to jump start your handicapping for the following week.

Check out this week’s 1-Page Stats page featuring all 83 games from last weekend plus the late August openers!

Sign up for the Green Sheet subscription to get this content every single week through the Super Bowl! 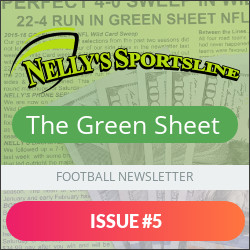 We’ve sent out Green Sheet Issue #5 with our first prediction of the season for Thursday’s Hall of Fame game.

Join for the entire season for $149 or get this week’s issue for $12. This week’s issue has several NFL Week 1 Pointspread Preview predictions plus historical coaching records in many situations in the preseason for all 32 head coaches.

The next issue should be out by August 2. 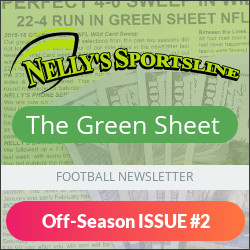 Our second Green Sheet issue dives into the 2019 NFL schedule with nearly 3,000 words of analysis plus schedule numbers and rankings in seven categories for all 32 NFL teams.

Find out great nuggets from the schedule analysis: One team has a 30-44 S/U since 2000 scenario on the schedule and that squad is likely to be a favorite in that game. Three teams fall into a win total valuation situation that is 4-1 the past two years including pegging major collapses from the Jaguars and 49ers last season – teams that fell short of the summer win total numbers by 4.5 games! There is one team that fits a scheduling role that has produced teams combining to go 56-39-1 the past two years. Another simple schedule formula has produced the ‘over’ in five of six win totals the past two seasons and four squads apply in 2019. Find out those teams and more in Green Sheet Issue #2.

This is just a four-page issue and as such is only $6 instead of the regular $12 price – sign up right here!

We have released a short off-season issue of the Green Sheet that includes the 2019 NFL Schedule Grid plus a coaching reference sheet to hang on to for the upcoming NFL season.

If you are not already signed up for the Green Sheet now is a great time to get on board as we plan to have several more off-season issues before the weekly subscription begins in late July.

Check out the first issue here – and save $10 on the full season subscription if you sign-up by May 10 using the COUPON CODE: MAY10

A $150 savings on the Nelly’s Full Season Phone Service for the 2019-20 football season expires on May 1 and a $100 discount will expire on June 1 – the phone service includes the full Green Sheet subscription as well.